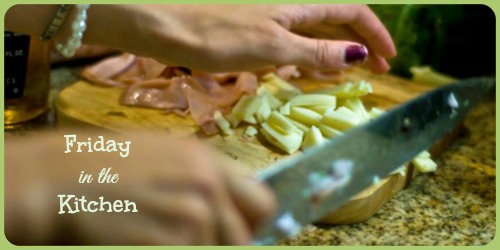 Here was this weeks haul from Costco... 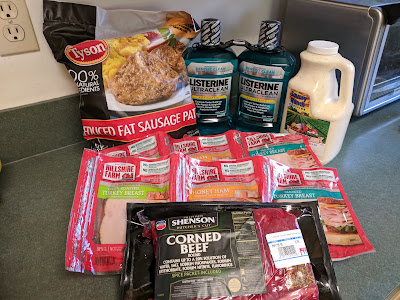 I bought a package of precooked sausage patties. We use these to make breakfast sandwiches because they are quick and simple. I also bought some ranch dressing. I buy Gregg's Ranch because I think it's the best tasting ranch dressing. I've tried other brands and always end up back with Gregg's. The mouthwash was also on sale and came to price much less expensive (almost half the cost per ounce) as the generic brand at Winco. Now we have enough mouthwash to last us a very long time! :)

I had originally planned to use corned beef (or pastrami) lunch meat to make our Reuben sandwiches but could not find any. Well I was able to find pastrami but really wanted to make them with corned beef. So instead I bought a corned beef roast. Costco still had them on sale. The sale was not as good a price as Winco, but we'd already been to Winco so I bought it at Costco instead.

I was so glad I did! It had to be the best corned beef I've purchased in a long time. Very little fat and seasoned perfectly (not overly salty). Was worth the little extra I paid for it. It made delicious sandwiches!

The lunch meat I use for hubby's wraps (that I send to work with him) were on sale. Costco had an instant coupon for $4 off so I bought 2 packages and put one in the freezer... 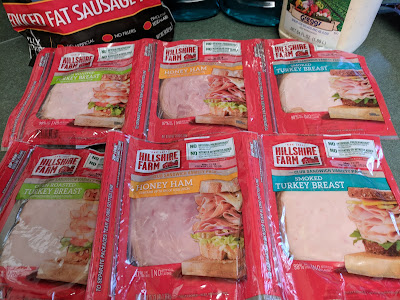 
Winco's haul included a lot of produce. Apples, bananas, oranges, beets, onions, mushrooms and lettuce. I bought 2 containers of half-n-half. I don't like running out the day before grocery shopping! :) I also don't like buying the bigger containers because they don't last until their expiration date after they've been opened. I got the typical eggs and milk and some tater tots to stock in my freezer as well as a few extra pantry items (the ramen, olives and chips). 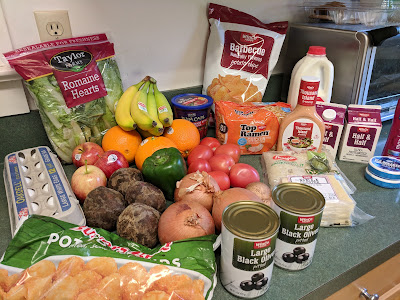 I picked up the needed ingredients for the Reuben sandwiches. Sauerkraut, swiss cheese and thousand island dressing. I already had the rye bread in the freezer... 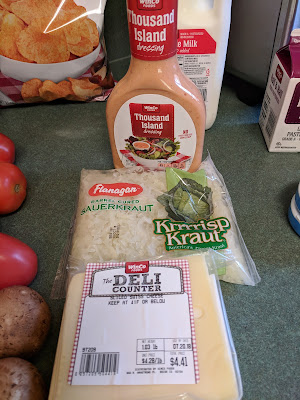 The only non food items I purchased were some mints and a bottle of hairspray (sitting way over to the right, kind of cut out of the top picture).

Grand total for groceries this week was: $97

I wanted to share how I made the Reuben sandwiches. They were fantastic! Made me wish I'd bought another corned beef to have them again later in the year. 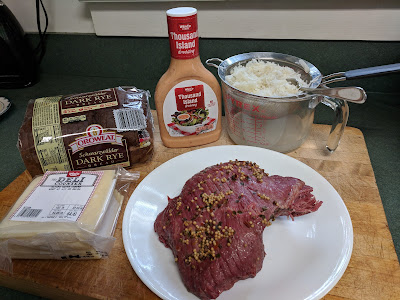 I cooked my corned beef in my Instant Pot. That made it so moist and infused with amazing flavor. I put a 1 ½ cups of water in the IP, put the trivet in and placed the roast on the trivet. I did not add any seasonings other then the little packet that came with the roast. I cooked it on high pressure for 70 minutes (it was a 2 ½lb roast). When it had cooled down a bit I sliced fairly thin for the sandwiches.


To assemble them I started with the rye bread, put a slice of cheese on it, then the corned beef, topped it with sauerkraut that I had drained well and some thousand island dressing... 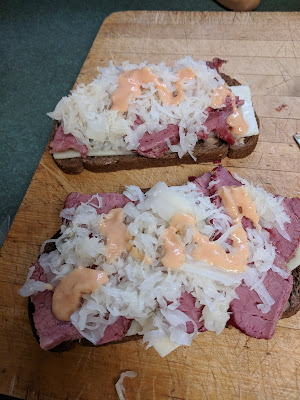 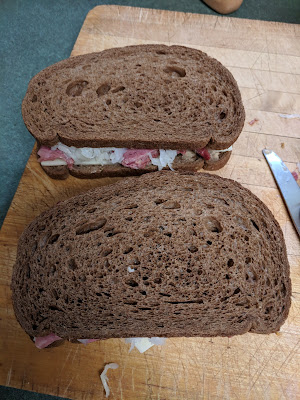 Put the top piece of bread on and then grilled them in butter in my frying pan, like you would a grilled cheese sandwich. You have to grill them on fairly low heat and do it slowly to make sure the cheese melts and the bread does not burn. I also covered my frying pan with a lid while I cooked them.

They were simply delicious! We had them for 2 meals and I still have a little of the beef leftover for lunches. I served them with a salad and chips. 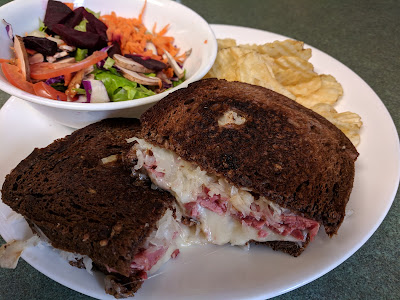 Now I have a question.. I was thinking how these could have been grilled in a panini press. I've been toying with the idea of getting one for a bit.

So my questions.. Do you have a panini press? Do you like it? What brand do you have?


That's all for this week's Friday in the Kitchen!