Grocery Haul for Two and a Little Kitchen Chit Chat 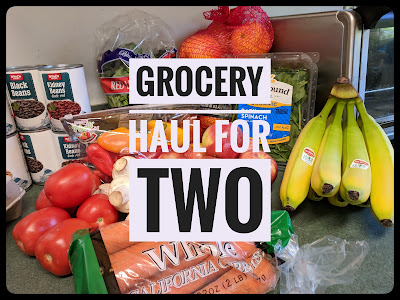 Good morning! Well this grocery haul made up for my last one that I did before vacation. It was so small because I didn't want a lot of fresh foods to go bad while we were gone. Of course we came home to practically nothing in the house (other than pantry items of course) and so a restocking was in order

The first stop was Winco.  I still don't need a whole lot of meat as I'm continuing to work through what I have in the freezer.  I am making progress..  I see the bottom of the box that holds my meat now! ha, ha!!  :) 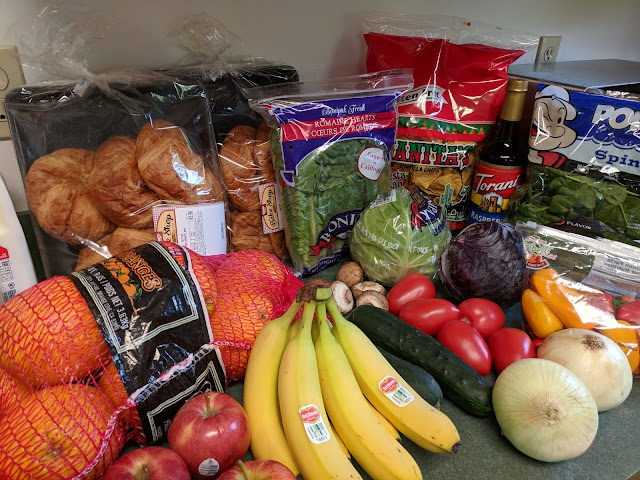 This is half of the haul, it was to much to get in one picture.  I was very happy to get stocked up again on fresh fruits and veggies.  There were the regular apples, oranges and bananas and for the veggies: cabbage (red and green), lettuce, tomatoes, mushrooms, cucumbers, peppers, spinach and onions.  I purchased 2 6 count packages of croissant rolls. I put them in the freezer and will pull out as needed.  I plan to use them for breakfast sandwiches. And hiding in there is a bottle of Torani coffee syrup. 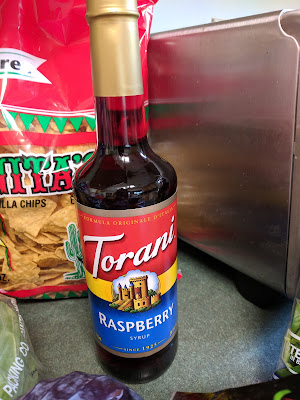 I use this, not for coffee but, to flavor sparkling water.  I add a couple tablespoons to a large glass, fill with ice and then pour a can of sparkling water over it.  It's nice and refreshing on gives my water a little bit of sweetness.

The second half of the haul... 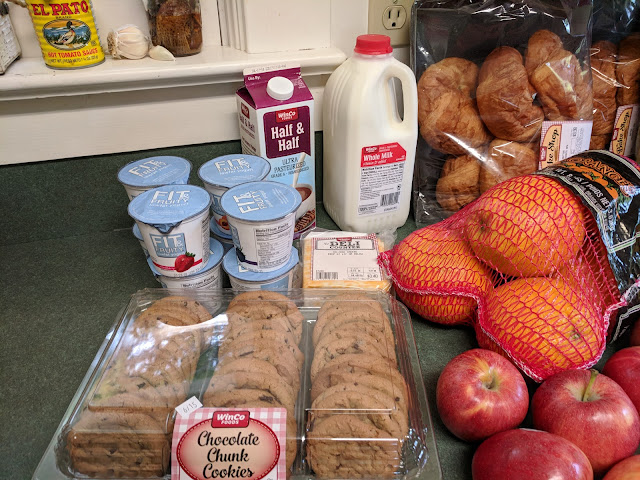 I have yogurt, milk, cheese slices and cookies.  I ended up bagging up 2 rows of the cookies and putting them in the freezer.  As we've discovered the 2 of us can't eat all of them before they start to go stale.

I also bought a few small foil loaf pans.  I have some bananas that need to be made into banana bread and instead of making 1 big loaf, I'll make a couple of small ones.  I can put one in the freezer or give it away. 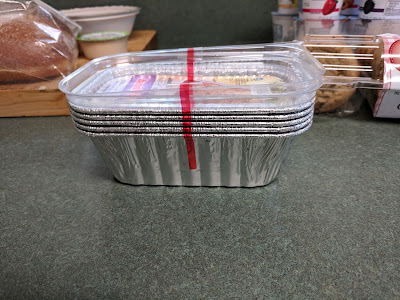 I also purchased a bottle of bleach and a couple quarts of lighter fluid for bbq-ing.  I did not include those items in my weekly total as I typically only include food items and the other would be put under "household" in the budget.  However I did include the little pans because they are directly related to food preparations.  I think eventually I'll purchase a few small loaf pans so I don't have to buy the foil ones.

The next stop was Costco... 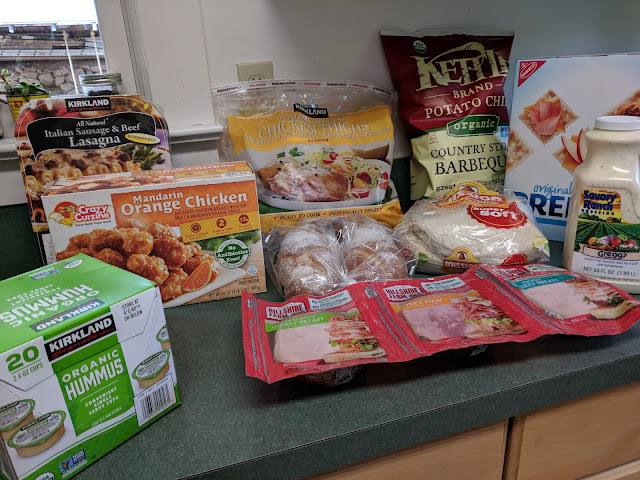 I purchased tortillas, lunch meat, ranch dressing, saltine crackers, a 2 pack of french bread, Kettle bbq potato chips..  the Kettle chips are our favorite kind and Costco brings them out once a year right around 4th of July time.  I also needed to restock my boneless, skinless chicken thighs.  I bought my 2 favorite convenience foods which are orange chicken and a 2 pack of lasagna.  I don't use convenience foods often, but they sure are nice to have sitting in the freezer for those days I need them.  The last thing in the pic is a box of organic hummus... 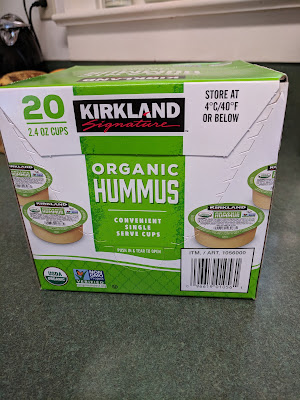 My hubby and I both love hummus but once again if we buy a big container of it we can't eat it all before it goes bad.  I saw the little individual cups and thought this would be the perfect solution.  What surprised me even more was the cost per ounce was actually less then the large container.  It was a win for us!

The total for Costco was $88 (rounded up)

I really don't have a new recipe to share this week because I haven't done a whole lot of cooking since getting home.  But I have a couple things to chit chat with you about..  :)

Patty Melts
I've discovered that sandwiches are a great thing to feed 2 people.  You can make just what you need and not have leftovers.  It's one reason I'm still thinking about a panini press.  In the meantime when I do make sandwiches I put the sandwich in my large cast iron pan, set a dinner plate on top and then put the another of my cast iron pans on the plate to give it the weight.  And that's what I did this week.  I was going to bbq burgers but last minute decided to make patty melts instead.

I cooked the burgers in my frying pan and then buttered a slice of bread, put it on my hot (medium hot) frying pan and topped it with the patty, cheese, onions, and pickles and a squeezed on some thousand island dressing, topped with the second slice of bread and proceeded to cook up the sandwiches as I mentioned above. The result was delicious! 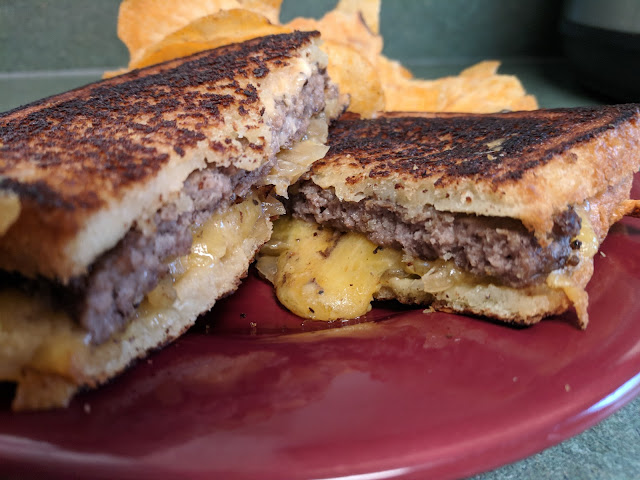 On to other things..

I bought a 2 loaf package of french bread, as mentioned above. 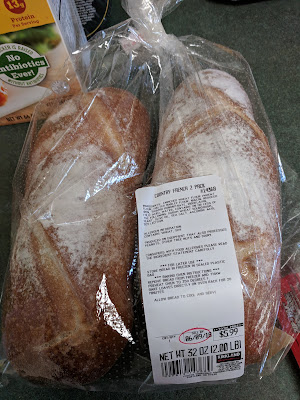 I always put this in the freezer and pull our one when needed.  We eat it for a meal or two and then I'm trying to find creative ways to use it up before it goes stale.  And if I can't figure something out  or we've had enough of it, the goat gets it with his daily bowl of fruit and veggie scraps.  So here is what I did with this 2 pack.. 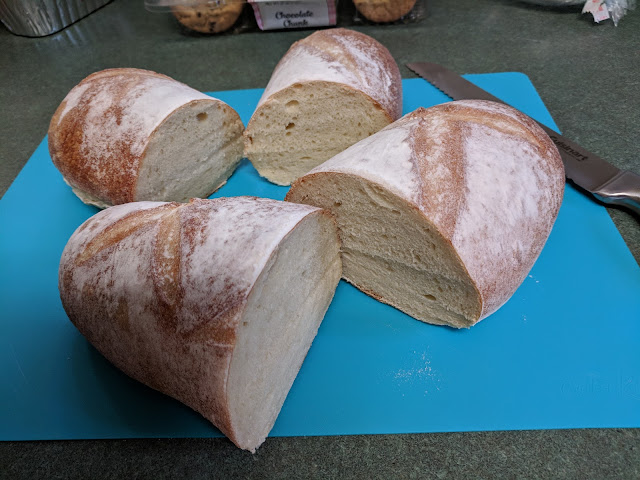 I cut each loaf in half and... 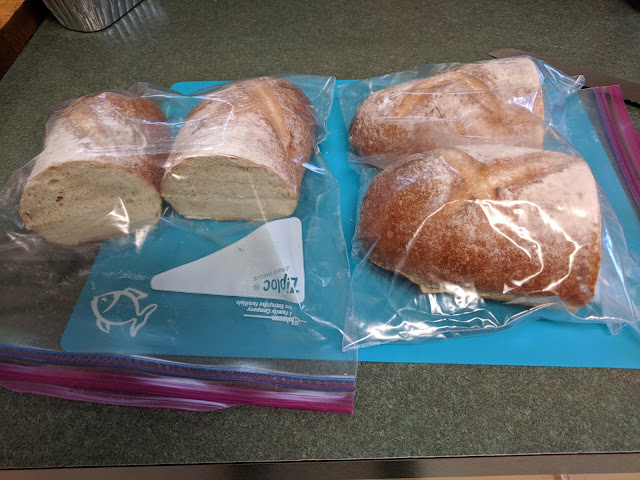 ...  put them in freezer bags.  This way I can simply pull out a half loaf when we need it and not have any waste.

And this is just for fun.  I mentioned on Wednesday about meeting up with our British friends.  Well they said they had gone shopping in town looking for for "biscuits".  Biscuits in England and biscuits in the USA are completely different.  I had always thought English biscuits were cookies.  They are, sort of, they are crisp and slightly sweet maybe more similar to shortbread?  Not sure as they are not as rich in buttery flavor as shortbread. They could not find any, so when hubby and I went out and about we stopped at Walmart and found English Biscuits.. 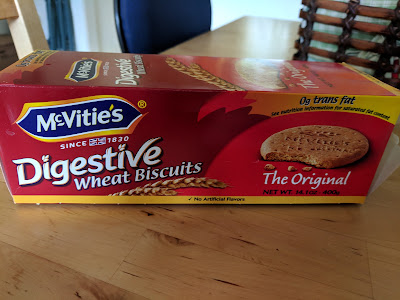 We brought them back and gave them to our friends and they were delighted!  I tried them, and I liked them! So I picked up a box for us the next time we were out. The perfect thing to go with a cup of coffee or tea for a nice afternoon treat (very British! ha, ha!! :). 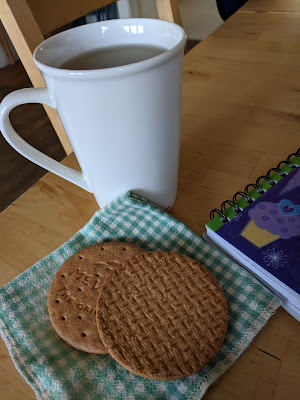 Well that is all the kitchen chit chat for this week!