Grocery Haul for Two: a Fresh Start for 2019 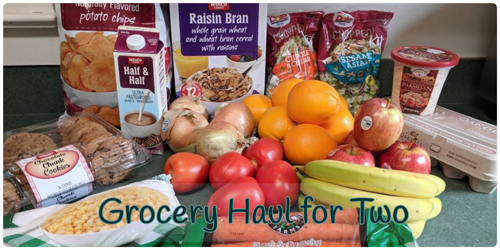 Good morning! I've decided to start fresh with the grocery haul for 2019. I started it last March, but want to go forward with the new calendar year.

This is my first grocery shopping trip of the new year and I only needed to restock fresh fruits and veggies and a few other things.

I've been running an average of about $110 a week. I'd like to get that down to about $100 or less. Not sure if I'll be able to, but we will see. Hubby and I don't require a lot, the biggest rise in my grocery bill comes when I have family here and at holiday times. So the key will be for me to keep our regular weekly spending down as low as possible.

I'm going to work on making more budget friendly meals, more often. I'm also going to continue my goal of no food waste, or as little as possible. It makes no sense to spend hard earned money on food and then throw it away. This requires not overbuying items that are not pantry or freezer foods, being a good steward of leftovers and cooking amounts of food that are reasonable for two people.

Here is what I've learned in the last year cooking for the two of us:

1# of meat will generally give us 1 to 2 meals, depending on what it is. If it's a roast then I'll have 1 meal and maybe another portion to freeze for an individual meal for my hubby to take to work. On the other hand if I use 1# of hamburger in spaghetti, that will last us for 2 nights and maybe 1 lunch the next day.

Weight things like pasta. I see it's really common for basic recipes to call for 12 or 16oz of pasta. That's way to much for us. We're not big pasta eaters. So I weigh out 6 to 8oz of pasta instead. As an example, 1# of hamburger, a 24oz jar of pasta sauce and 8oz of spaghetti noodles gives us 2 nights of dinner. If I used more pasta than we'd be eating spaghetti all week.

I've had to resize my brain as to what is enough for the 2 of us. I use to routinely cook 2 to 3 cups of rice. That ends up being way to much and I'm freezing it or we're eating rice all week with our meals. Nowadays I only cook 1 cup of rice and find that's perfect.


Now for my first haul of the year.. 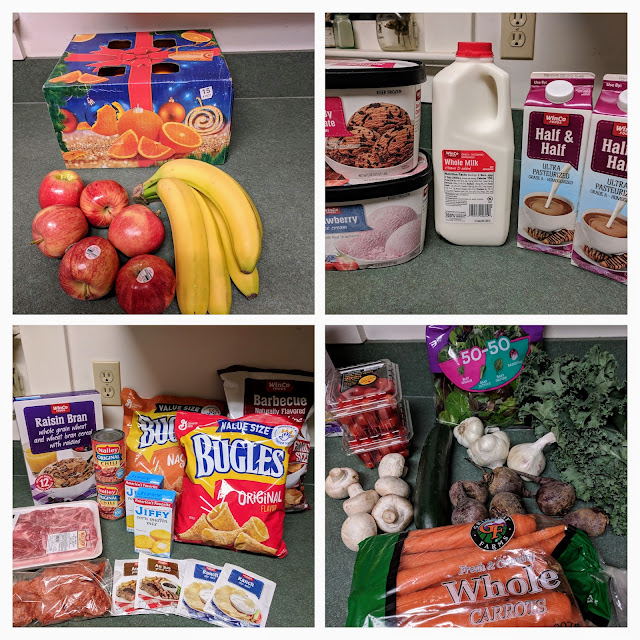 It was a pretty basic shopping trip. I was out of most of my fresh foods because we'd been traveling and not home for several days. I purchased oranges, apples and bananas. The oranges are a 10# box that I got for $7.88, making them .78 cents a pound. I think that might be the best deal I've gotten on oranges in quite some time.

I still had red and green cabbage in the fridge and a few mini peppers that were still good. To round out our fresh veggies I picked up grape tomatoes, a lettuce blend, kale, a cucumber, mushrooms, beets and a 2# bag of carrots.

Dairy was simple, milk, ice cream and half & half. I bought 2 of them, they were on sale for $1.88 each with a date of February 17. If I buy a larger container of half & half it goes bad before we can use it all.  I find buying smaller containers saves me money because I'm not throwing away soured half & half.

I picked up a couple cans of chili and some cornbread for the pantry. I have a pot roast in my freezer and plan on making Mississippi Pot Roast soon so I bought the packets of ranch and au jus for this.  I bought 2 of each so I can have the extras in my pantry.

We were almost out of raisin bran, or so I thought. I came home to realize I still had one unopened box on the shelf. I guess we'll have plenty to last us for a while! Hubby was with me and found chips on sale and picked up 3 bags.  I now have a ton of chips in my house :D .. but snacks are his thing. Hopefully we can go a few weeks without having to buy any.

Finally I picked up some pork steaks. I like them better than pork chops. They are more moist and tender.  They were $2.64 a pound and my package was right around 2#'s.  I also picked up some sliced pepperoni from the deli for pizza making. 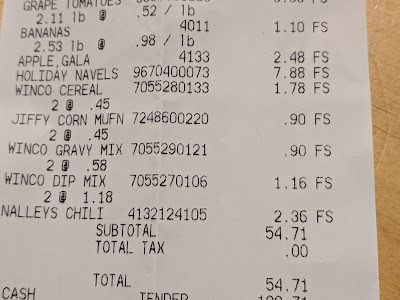 Whenever I post totals I always round up because even numbers are simply easier to work with.

Grand total for groceries
this week: $55