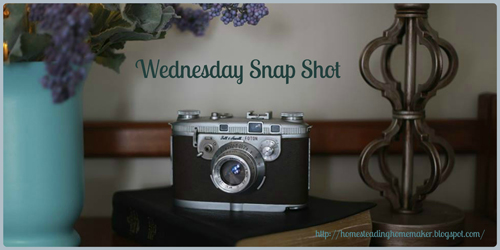 Wednesday Snap Shot will have a little different look for awhile. When I'm back up and running again, I'll return to the previous format.


Good Morning! I'm running late this morning. Yesterday was a long day and we didn't get home until late so this morning was a sleep in day.

We have some power lines that run through our property. The power company was here last week to let us know they were making some changes and rerouting a few lines. They also need to move the power pole that feeds our house. There was a tree in the way of their plans and they were going to trim the tree but my hubby asked if they could cut it down instead. It was a tree that we were planning to have cut down anyway but had not done it yet. They said yes they would and we were thrilled. It costs about $600 to have our tree guy cut down a tree so we were able to save that expense and it worked much better for the power company, a win-win deal. 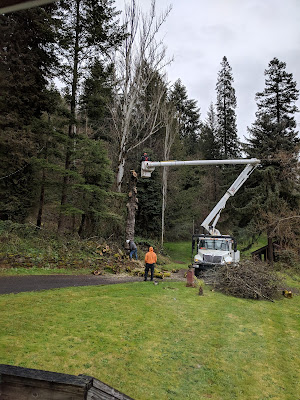 Since they've been here my hubby got the mess all cleaned up and now has to deal with the trunk of the tree. It's a great head start to next winters firewood!

My exciting news for this week is that my youngest daughter Sierra and her boyfriend Rex have officially announced their engagement! We are so happy about this. Rex is an amazing young man and we are blessed and thankful to make him part of our family. The wedding date is set for next year to give us time to plan. 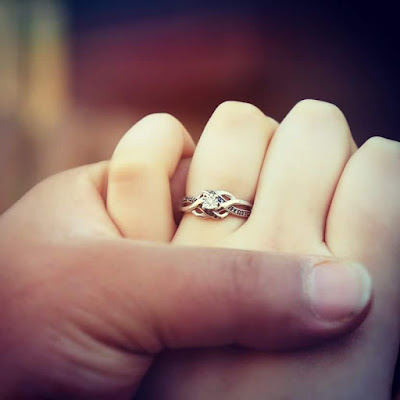 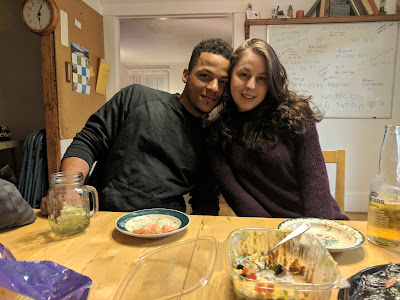 Yesterday one of the things I had to do was go to an eye appointment. This is to deal with my vision issues. It's been a long time in coming. The doctor I saw was a specialist at the University hospital in the city. It took 3 months to get an appointment and unfortunately the original appointment was set for the end of January. Due to my surgery and medical complications following that the appointment had to be canceled and rescheduled. It was almost another 3 months before I could see him.

I have spent more then a year now dealing with double vision. It's been a long journey to figure out what was causing it. I've had countless blood tests to rule out many things such as thyroid, diabetes, auto immune issues and so forth. I had an MRI done last year to rule out tumors, I've been to a neurologist to rule out nerve issues. Finally in October of last year I saw the first specialist and was told it was a muscle issue called, “falling eye syndrome”. The muscles in my eyes are not working together and have caused my eyes to go out of alignment. Yesterday was the appointment with the specialist who has recommended surgery.

As to be expected I have a lot of anxiety about this due to my last surgery. I'm praying for the best direction. I'm going to move forward with planning the surgery for sometime this summer (depending on how full the doctors schedule is) to give me time to fully recover. If for some reason I don't feel a peace about this when the time comes I can cancel.

Goals
Today I have a couple loads of laundry to do and swish through the bathroom.

I also want to get upstairs and make the beds in two of guest rooms so they are ready for the next guests.

Dinner will be hamburger patties w/onion gravy and rice. So that should be a quick and simple dinner to put together.

If the rain stays away I'll get out and take a walk.

Steps, Steps, Steps
I walked the farthest yet this week (post surgery). On Monday I was able to walk about 2 miles which included a big hill (going down was easy, coming back up that hill was the challenge). It was also a busy day for me and I ended up about 200 steps shy of 9000 steps! :) I can tell it won't be long before I have my first 10,000 step day.


View from my Deck
We had a lovely day on Monday. It was around the mid 60's and the sun came out and there was no rain that day. So far the month of April has been very wet. As I listen to the weather reports and look at the forecasts it seems there will be rain every day for as far out as can be predicted. I just hope this followed by some nice dry May days.. only time will tell.

This mornings view from my deck.... 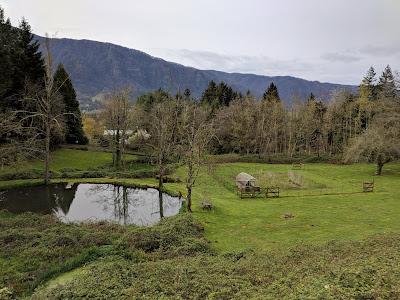 My duck enjoying the warm day on Monday. My hubby also was able to get out and do some mowing. 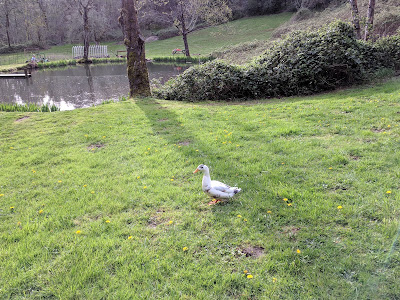 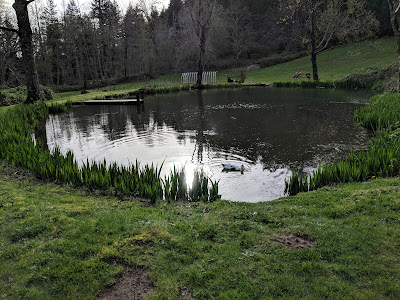