I've been 'Missing In Action'! What a July this has been. Since Friday I've been traveling back and forth to the hospital (about an hour away) for my youngest son. All last week he told me his right side hurt. Due to him having done a lot physical activity I thought maybe a pulled muscle? But to rule anything else out I took him to the doctors office. They checked him out and said it was a pulled muscle and sent us home with a prescription for anti inflammatory meds. Two days later he was much worse and had a temperature. It was an effort to walk from his room to the couch. I took him back to the doctors and they sent me to the Children's Hospital in the city. After exams and a CT scan it revealed he had a ruptured appendix.

He is currently still in the hospital and doing better each day. We are hoping he will be home in a couple days. Surgery is then planned for him in about 4 to 6 weeks. Procedures have changed over the years and they no longer operate immediately. The get rid of the infection, wait for his body to heal and after that, surgery.

I'm incredibly thankful for such an amazing family. He has had someone with him more than not.. being so far away makes it hard, but with family stepping in and hanging out with him it has made things so much better!! Even his nurse was amazed at the family support! Just praising God for His many blessings.


Now you can see why there's no Menu Monday! Today! :) I've barely been home long enough over the last few days to cook anything. I managed to get to the grocery store on the way back from the hospital one day and grabbed a few things. We've lived off of my home canned foods, a bbq one night and another meal I discovered last week and plan to share with you.. Summer Pasta! Talk about the simplest summer meal ever. I have some pics and the recipe to share.. just no time right now.. I'll be posting as soon as I can! ~smile~

My boy.. Leanne snapped a pic of him.. trying to eat some food. I'm thankful to say he does have his appetite back now!! 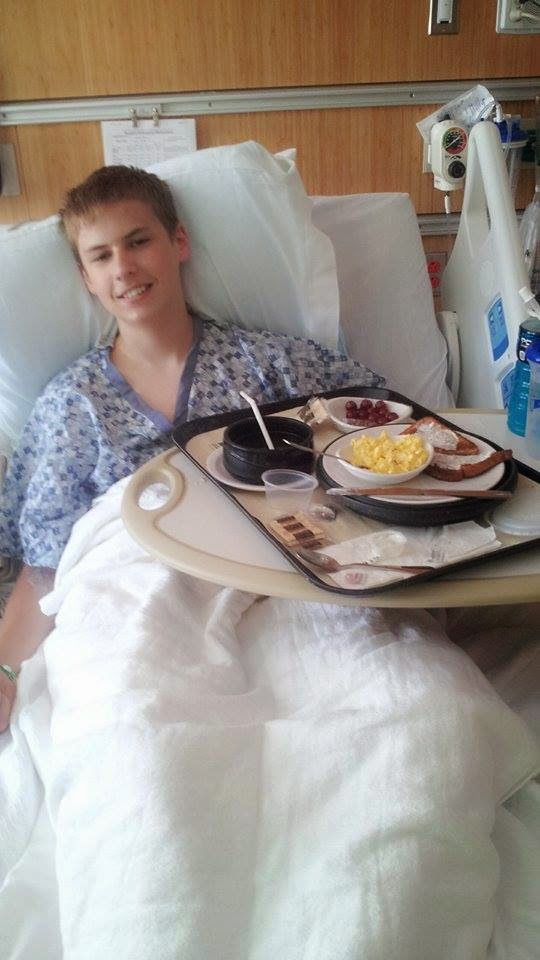